For more details visit the Arsenal website
Posted by Sheila Farrell at 2:41 pm No comments:

Our victory at The Valley will be remembered for Robin van Persie's winning goal. It was outstanding, quite unbelievable and something which nobody was expecting.

Emmanuel Eboue got forward well on the right but when he crossed the ball I couldn't see anybody in the box. Then suddenly Robin arrived and, technically, his volley was perfect. It had power and pace and finished in the top corner. It was the goal of a lifetime.

Was it the best I have seen during my 10 years at Arsenal? Well, I must check because I have seen plenty of good ones, but it is certainly in the top five.

That shows that, as a manager, you need luck as well because I kept Robin on and he went on to score two goals, including his fantastic winner.

Overall, I think Robin has matured. He clearly has the talent and when you can adjust to the right attitude then you can become a great player. But first you need the talent. He has that and the attitude you can work on. He is getting better and better.

As Robin has shown, he can score goals. He has that quick, spontaneous movement that tells you he has class. His first goal was less spectacular but if you examine it you can see he did not need much time. He controlled the ball instantly and then it was in the net.

As for the game itself, I felt that Charlton fought very hard. When you go away after a Champions League game and then go 1-0 down, you need some quality to win. We could have finished it off a few times, but Charlton could also have come back with a few minutes to go.

Their best chance was Jimmy-Floyd Hasselbaink's late header. When I saw the ball going to him I thought it would be 2-2 but, luckily for us, he missed. Hasselbaink did set up their goal, of course. I thought it looked offside but the replay showed it wasn't. Maybe Kolo Toure played him onside.

We have found some momentum now. We have won twice away from home ? Charlton and Manchester United - and two Champions League games. So it is five games on the trot, but the negative thing is the interruption now for international duty.

When the players come back from international games they do not have the same focus on club football as they do before they go. We will have to get our attitude right though because we have a Champions League game in Moscow in the week after the international break.

Thanks for your support.
Wenger Signature

Posted by Sheila Farrell at 12:02 pm No comments:

Can't wait till the next game at the Emirates ... I feel this is going to be a good season.
Posted by Sheila Farrell at 3:12 pm No comments:

Arsene Knows!
Posted by Sheila Farrell at 3:04 pm No comments: 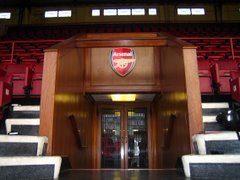